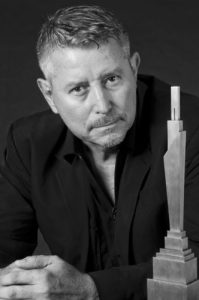 Sculpture in the public space

Alberto Vargas is a sculptor, an architect and a landscape gardener all in one…. He is certainly not a statuary! « Evoke » and « recall » are the key words in his sculptural alphabet. In fact, his cultural influences are multiple: Greek, Latin, Gothic, even Baroque…

From each, he retains only what is appropriate to his project. Often, these sculptures bring to mind models and small reproductions of disappeared temples… He will never disown this source, but it is not the only one. Not far from the classicism of the columns and in contrast to them, one observes low sculptures, of an undeniable stability. In some cases, the work clearly emerges from the far reaches of ancient Mexican architecture: a pyramid, a staircase on a dark marble cone, possibly topped by less classical constructions, such as those pyramids of the ancient Mexicans that the conquerors topped with their own temples. Here realism shines through.

Alberto Vargas has a double attraction that is translated into forms: serenity and torment, balance and impetuousness. The smooth, pure, imperceptible form is fundamentally opposed to other creations that are all straight and oblique, angles and points, which are also distinctive signs of this artist. There are no out-of-place features or expressive gestures. Everything is geometric, straight, clean. His forms are ‘clear and distinct’.

Moreover, the combination of very solid materials (metal, hard stone) can give way to a confrontation between the common industrial steel of proven strength and the noble whiteness of fragile alabaster. But doesn’t an artist’s art also consist in raising all materials, whatever they are, to the same level of quality? Elegance of his forms, synthesis and perfect purity in his finishes, rigour in his knowledge of the material… Alberto Vargas achieves excellence! Note: the artist also creates monumental works, intended for the urban space and therefore out of scale to take place in an exhibition.

Alberto Vargas’ work has been shown for more than 20 years in galleries, museums and institutions in the capital of Nuevo León, such as the Monterrey Museum, the Centennial Museum, the Monterrey Metropolitan Museum and the Alfa Cultural Centre. He also exhibits regularly in the rest of the country, in Mexico City, Merida and Guadalajara, as well as abroad in the United States, France and Spain.

He has participated in several international biennials and art fairs, including the IV and V FEMSA Biennials in Monterrey, Expoarte, VI International Contemporary Art Fair and I Bienal de Escultura in Guadalajara, as well as in some editions of ARCO in Madrid, Art Miami in the United States, and FIAC in Paris.

Alberto Vargas owns public sculptures in museums and universities in Monterrey, Nuevo León and Los Angeles, California. His work is part of important private collections of companies and institutions such as the collection of the Pinacoteca de Nuevo León