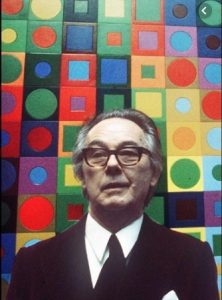 « The future is taking shape with the new geometric, polychrome and solar city. Plastic art will be kinetic, multidimensional and communal; abstract for sure and close to science.  »

Known to the general public for having modernised the logo of the Renault brand in the 1970s, Victor Vasarely is a very special artist in the history of 20th century art for having created a new trend: optical art. Developing his own model of geometric abstract art, the Hungarian artist, who became a French citizen in 1961, uses a minimal number of shapes and colours. Vasarely assimilates, for example, the lozenge and the ellipse to deformations of the square and the circle involving space and movement.
He calls his works based on programmable permutations of coloured shades « algorithmic ». He plays on the shadow effects given by these shades to force the retina to create its own image. The variation manifests itself in the creation of series spread out over time. These series are the result of the same plastic research or correspond to the successive realisations of the same prototype. The notion of repetition is related to the mathematical notion of symmetry. In a Vasarely painting, symmetry is most often expressed along several axes: vertical, horizontal and diagonal. Most of Vasarely’s works use many mathematical resources. He chooses usual shapes and figures of the plane (squares, parallelograms, rhombuses, circles, hexagons…) to make volumes appear (spheres, parallelepipeds, cubes…) and thus give relief to his drawings. He also uses specific geometrical processes such as symmetry (axial with different types of axes, central), series, accumulation of shapes… and he enjoys distorting perspectives in order to obtain optical effects.

He is interested in physics, architecture and industry and develops his universal language. His compositions become more complex, compositions where geometric elements merge, interlock, permute and assemble to come closer to the cellular structure.

His work is very coherent, from the evolution of his graphic art to his determination to promote a social art, accessible to all. Desiring to take art out of the museums and into the public space, Vasarely embarked on a vast process of secularization: he redefined the modes of conception and production of his works in order to allow for a larger social diffusion. Unconcerned with private property, the artist challenged the idea of a single object, and allowed for an art that could be multiplied endlessly.

Thus, we find him on the books of the « Tel » collection of Gallimard, on the cover of David Bowie’s « Space Oddity » in 1969, in a mural in the Montparnasse train station, on Michel Drucker’s set, in the cinema in La Prisonnière by Henri-Georges Clouzot or Peur sur la ville by Henri Verneuil…