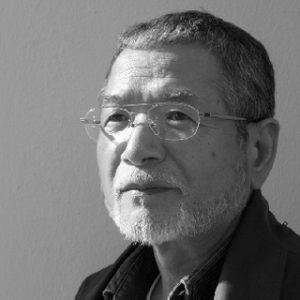 In situ and Monumental realisations

In the beginning, Satoru Sato based his work on oppositions of chromatic solids with rigorous forms. Most often the square, symbol of perfection, echoes Japanese architecture where the moya is the heart of the building.
In 1976, he began by surrounding the canvas with a wooden structure or punctuating its painted surfaces with asymmetrically placed rods. This first step leads to the creation of relief paintings. The artist then partially abolishes the canvas, giving way to emptiness, which becomes a central element of his reflections.
Later, he developed a new line of thought around the notion of verticalism. His use of raw materials, such as canvas left bare, wood or metal. Treated in a reduced palette, and his conception of intermediate constructions, halfway between painting and relief, led Satoru Satō to sculpture proper and to a reflection on the integration of art into the environment.

“The use of the abstract is now the inevitable springboard for going further in the journey of consciousness. It is no longer a question of representing the banal object of desire, but desire itself, its strength and its fear, the violence of its impulse and its slow mysteries, everything that the geometrisation of emotions would give the illusion of mastering.

In these zones, the regulated powers of the abstract underlie a more conquering aspiration, a desire for which the sexual slit would only have been the pretext, in other words, the primary way in: in short, the whole of Satoru Sato’s work, built globally on verticality, deviates from the quest for passage. (…) Nourished by a rich inner energy, ascetic without coldness, audacious without fuss, now mature, Satoru Sato’s work no longer seeks passage, it is passage.”

“From stage to stage, the soul of geometry reaches, in Satoru Sato’s work, its extreme deprivation. The zero point, reached in the white or black monochrome, he will go beyond it by finding, for this nudity, a new identity, either by a simple line or by a muted nuance, as effaced as present. Everything is then limited to a report, itself reduced to the affirmation of a delicacy of spirit.

Can the expression of a whole sentence be contained in a single word? Can it be summarised in a simple comma? A comma made in such a way that it would allow one to read beyond the sentence? This is Satoru Sato’s risky attempt. With almost nothing, he will say more than a lot.”

In situ and Monumental realisations: