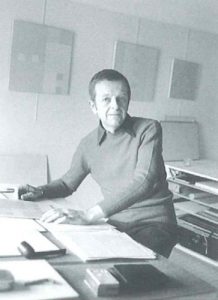 « There is a mystery surrounding Guy de Lussigny’s paintings. Like the whispered testimony of an inner adventure, almost a mystical experience. All he needs to do is to use the simplest geometric form – the square – and to play on the most imperceptible chromatic oppositions, to expand his pictorial works, to raise them to the level of a real universe, where it is less a question of gathering, of looking elsewhere for happiness, than of gathering oneself, of finding oneself.

Frédéric Vitoux, of the Académie Française

Born in Cambrai in 1929, Guy de LUSSIGNY began painting in 1950. Initially figurative, he quickly followed in the footsteps of Mondrian and Malevitch. His meeting in 1955 with Gino Severini, one of the creators of the Italian Futurist movement, was decisive. Severini encouraged him to continue along the path he had chosen, geometric abstraction. Very quickly, Lussigny favoured the square, the straight line, and then colour. His work on colours led him to meet the painter Auguste Herbin in 1956, a second major encounter. His first solo exhibition took place in Paris in 1959. From then on he exhibited regularly in France, throughout Europe and in Japan…

Guy de Lussigny moved to the capital in 1967 and participated in numerous exhibitions: Réalités nouvelles, Grands et jeunes d’aujourd’hui, Comparaisons… He worked with the gallery owner Denise René from 1969 to 1975 in Paris and New York. In 1974, he made a third decisive encounter, with the Italian painter Antonio Calderara, with who he became a great friend, and later with the German sculptor Hans Steinbrenner, the Italian sculptor Francesco Marino Di Teana and the painter Antoine de Margerie.

Guy de Lussigny’s painting, sober and precise, is of great poetry. For him, the square is « the most stable form that the human mind has invented » and the line the « convenient concept of mathematical reasoning ». On these elements, Guy de Lussigny creates a plastic language that goes towards « a certain idea of perfection ». In 1998, the Académie des Beaux-Arts of the Institut de France awarded him the Dumas-Miller Prize.

His works are present in the public collections of many museums: Valenciennes, Montbéliard, Fondation Calderara, FNAC, FRAC Île-de-France, Mâcon, Mondriaanhuis, Musée Tavet-Delacour de Pontoise, Musée Matisse du Cateau-Cambrésis, LAAC de Dunkerque and above all at the Musée des Beaux-Arts de Cambrai with 70 works from the donation of André Le Bozec, a great collector and sponsor.